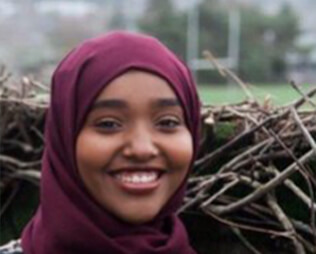 Hikma Sherka exudes strength, even before I knew of her incredible story of immigration at age 11 from Ethiopia. Hikma tells me about the turning point in her life. Two years ago, she went to the 100K Opportunity Fair and met Karen, who ran the King County Youth Advisory Council at the time. Hikma was immediately interested in the idea of a youth-led council. She did not realize it then, but this would be the first in countless steps that would lead Hikma to where she sits in front of me today – still an active member of the King County Youth Advisory Council, a successful college student studying Law, Societies, and Justice with dreams of becoming a civil right attorney, and Vice President of the Ethiopian Muslim Association of Seattle’s youth group.

It wasn’t an easy road to success. Hikma shared with me that when she came to the states she was put in the same math class as her younger brother, who was two years younger than her. She was forced to learn 4th grade math, which in Ethiopia is equivalent to 1st grade math. In Ethiopia, Hikma was already studying high school math in U.S. standards. She also tells me about the lack of language support that was offered to the immigrant population at her school. She gives credit to her father for her exceptional English, who made her and her siblings read books in English.

“When you are an immigrant, the teachers have very low expectations for you. Especially when you don’t speak the language,” Hikma tells me with tears in her eyes. She tells me the best thing providers and teachers can do when serving the immigrant population is to never assume that they can’t do what others in the class are doing just because they can’t speak the language. Hikma shared a recent story of a college professor questioning an essay she turned in, asking her, “Did you really write this?”

I was impressed with Hikma’s kindness and courage when she politely responded to her teacher that yes, she did in fact write that essay. She included past essays to prove her innocence but then told the teacher that in the future, she would not hesitate to report him for racial profiling. A beautiful example of advocating for yourself.

When asked what advice Hikma would have for other immigrants who are struggling with the same things she and her siblings struggled with, she said “Although resources aren’t given to you, the resources are out there. I would say find someone who has been through what you’re going through and ask for support.”